Swiper now has an ivy back end

Just three days ago, I wrote swiper and introduced it in a post. And while swiper solved the problem of helm-swoop being awkward for me to use, swiper's code itself is pretty awkward, since even after using helm a dozen times in my packages, I'm still not well-versed in its internals.

And, apparently, there are people who don't like helm because it updates a lot. I don't know if it counts as a viable complaint, but I do agree that the helm update time is quite long. So I wrote down an alternative completion back end for swiper. It looks quite similar to ido-vertical-mode, although it is completely unrelated to ido. In fact, the matching algorithm currently is similar to helm-match-plugin: "for example" is transformed into "\\(for\\).*\\(example\\)".

Currently, in the ivy version of swiper only the anchoring algorithm is missing. Anchoring is what I call the process of selecting a close candidate when the number of candidates changes. It seems that helm doesn't implement an anchoring algorithm, so both helm-swoop and swiper implement their own. I don't know how easy it would be to write down the proper generic thing, my current implementation for the helm version of swiper is quite hacky.

Just to explain to you what needs to be done. Suppose there's an input "ab" that matches 50 candidates, and the candidate number 42 is the current one. Now, if the user types one char to make the input into "abc", the number of candidates has changed to 10, and the candidate that was current previously doesn't match any more. It is up to the matcher code to decide which of the 10 candidates has to be current now. Usually it doesn't matter much, but in the case of swiper it matters since the point will be moved to the current candidate in the original window.

In any case, there's still a lot of things that have to be done for ivy, but I think that it's quite usable now. Actually, I've already added it to my bindings: 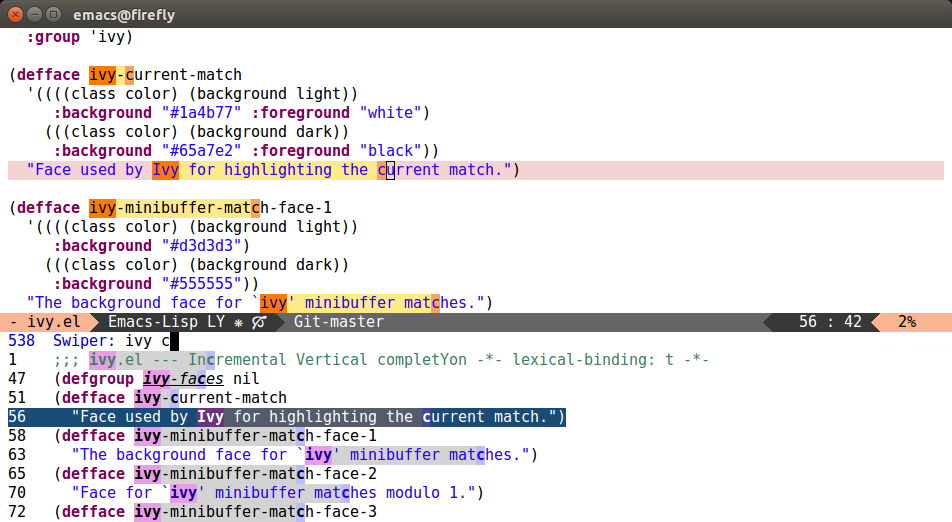 And here's an example of completion in dired: 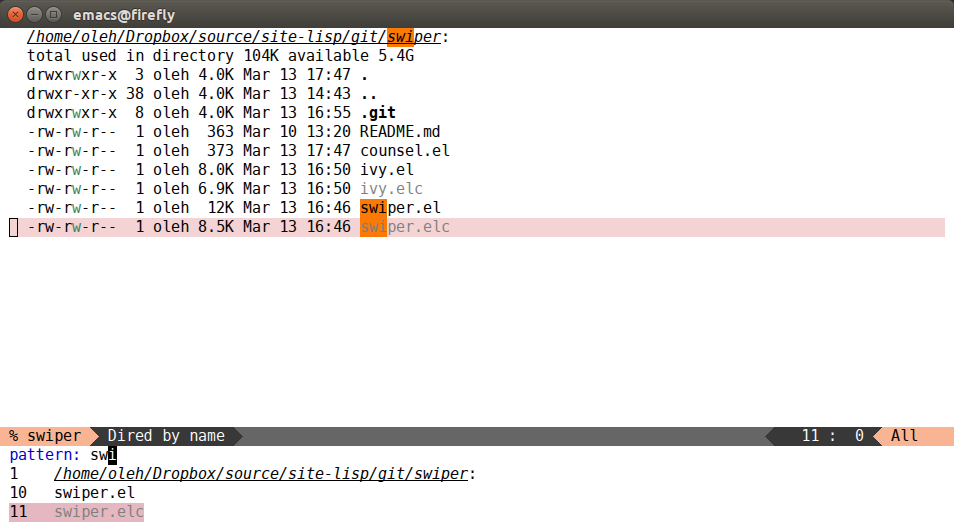 You need to have Emacs 24.4 in order to get a nicer highlight in the minibuffer that uses add-face-text-property instead of the old propertize.

There's a custom variable that decides the height of the minibuffer window, you can set it as you like:

Give the new back end a go, see if you like it. It looks quite pretty and minimalist to me, but I'm biased since I made it.