I've had an idea with this feature for quite some time, and only recently got to finally implement it. So here it goes: with ivy-occur, bound to C-c C-o while in the minibuffer, you can store almost Ivy any completion session in progress, and you can have as many of them as you like.

This is where the command name originates from: swiper + ivy-occur = occur. You can store all of swiper's matching lines into a separate buffer. This doesn't give too much advantage over the good-old occur, the only thing is that you can use ivy-style regexps with wild spaces, and have an interactive preview beforehand. Having said that, it actually sounds pretty good!

As a reminder, counsel-rhythmbox has two actions: play (the default) and enqueue. In this new buffer, pressing RET or mouse-1 will call the play action (since it was active at the moment ivy-occur was called) for the current candidate. So I've effectively added a playlist functionality to counsel-rhythmbox through a generic command.

Suppose I want to go through the documentation of all variables that end in -function. Easy:

I get a new buffer named *ivy-occur cousnel-describe-variable "function$*" with 346 candidates. I can go through them at my own pace, possibly doing other completion stuff in between without disturbing my process. It's also convenient to navigate these buffers with swiper.

Let's tweak the previous one. After inputting function$ I can press C-M-a (ivy-read-action) followed by d to select the definition action. Then again C-c C-o (ivy-occur). Pressing RET in the resulting buffer will take me to that variable's definition, instead of describing it as before. A similar thing could be done for counsel-rhythmbox to get the enqueue action in *ivy-occur* buffer, instead of play.

This is an improvement to my workflow for quickly looking at a new package's features. This can be done with oge (lispy-goto-elisp-commands) from lispy, which scans the source for (interactive) tags and allows to jump to their definition.

It's a pretty cool optimization, compared to looking at all tags. For example, projectile currently has 375 top-level tags (functions and variables). But with lispy-goto-elisp-commands I only get 48 tags. And now I can have them in a convenient permanent list too. 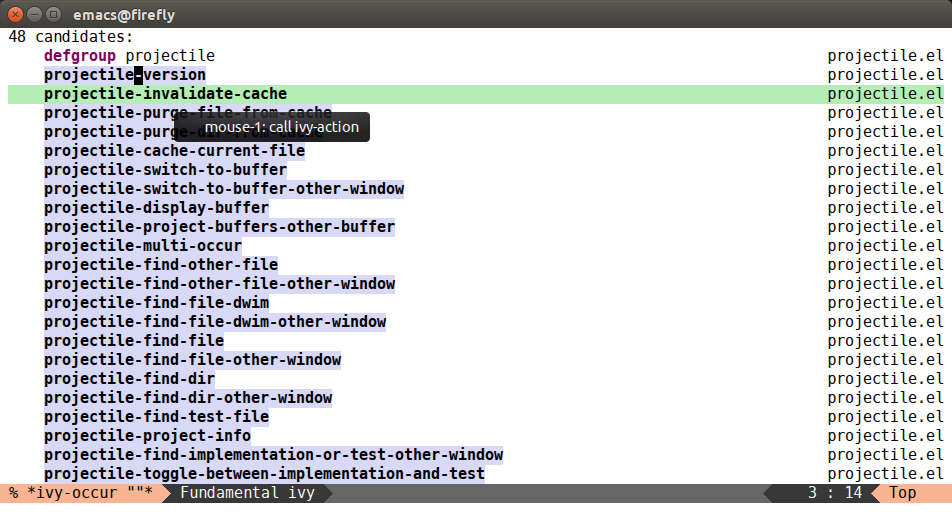 As a reminder of how it works, counsel-M-x is defined with a single action that calls the selected command. But then, I've also added this statement at top-level of counsel.el:

This means that you can add as many actions as you like to ivy-read commands. And of course customize the binding and the hint, which are in this case d and definition respectively.

Unfortunately, since the *ivy-occur* buffer needs to know the action to execute, it only works for commands that explicitly pass :action to ivy-read. For instance, it won't work for package-install with ivy-mode on: the buffer will be properly generated, but pressing RET won't install a package.

Fortunately, it's not hard to write a version that works:

Here's a buffer with a list of packages matching "ga"; pressing RET will install the selected package:

In the initial post, I wanted to bind ivy-occur to C-c o instead of C-c C-o. But I was reminded that C-c LETTER are reserved. I still think it's a better binding. If you agree, you can add it to your config:

Additionally, ivy-occur is also available on C-o u, through the C-o hydra.