The current release constitutes of 339 commits and almost a full year of progress since 0.8.0. Many issues ranging from #493 to #946 were fixed. The number of people who contributed code as grown to 63; thanks, everyone!

For all ivy completions, pressing M-o allows to execute one of the custom actions for the current command. Now you have an option to use hydra for selecting an action. Use this code to turn on the feature:

One big advantage of the new interface is that you can peak at the action list with M-o without dismissing the candidate list. Press M-o again to go back to candidate selection without selecting an action.

Here's some code from my config that ensures that I always have some extra actions to choose from:

A nice improvement to the grepping commands is the ability to specify extra flags when you press C-u (universal-argument) before the command. See this gif for an example of excluding *.el from the files searched by ag.

Unique index for alist completion was added. The uniqueness assumption is that the completion system is passed a list of unique strings, of which one (or more) are selected. Unlike plain string completion, alists may require violating the uniqueness assumption: there may be two elements with the same car but different cdr. Example: C function declaration and definition for tag completion. Until now, whenever two equal strings were sent to ivy-read, only the first one could be selected. Now, each alist car gets an integer index assigned to it as a text property 'idx. So it's possible to differentiate two alist items with the same key.

You can now customize faces in ivy-switch-buffer by the mode of each buffer. Here's a snippet from my config: 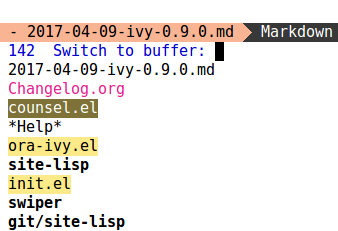 Customize swiper-include-line-number-in-search if you'd like to match line numbers while using swiper.

Offers completion for bookmark-jump. Press M-o d to delete a bookmark and M-o e to edit it.

A custom option counsel-bookmark-avoid-dired, which is off by default, allows to continue completion for bookmarked directories. Turn it on with:

and when you choose a bookmarked directory, the choice will be forwarded to counsel-find-file instead of opening a dired-mode buffer.

Completion for colors by name:

The colors are displayed in the minibuffer, it looks really cool:

You also get 108 shades of grey to choose from, for some reason.

Completion for faces by name:

Shows the history of the Emacs commands executed and lets you select and eval one again. See #826 for a nice screenshot.

Picks up company's candidates and inserts the result into the buffer.

Jump to a directory or a file in the current directory.

Completion for the last hydra's heads.

Completion for headlines of files in your org-agenda-files.