This is a slightly obscure feature that I've added today to ivy-mode. It's obscure, since very few packages give their candidates a face with a custom background. Still, when that happens, a conflict arises:

Which face to apply: ivy-current-match or the existing one? 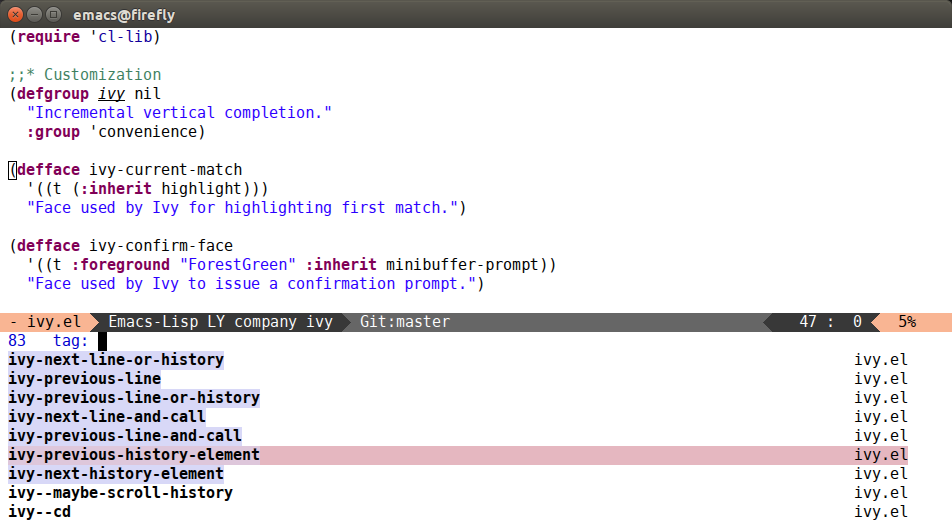 By the way, if you're wondering where the backgrounds come from in the first place, it's lispy-goto function (if you know what imenu is, it's an advanced version of that). This function collects all the Elisp tags in the current directory, and offers to jump to them. The functions that have interactive in them, are highlighted with lispy-command-name-face. In the above screenshot, the first 7 functions are interactive, and the other 2 are not.

If you're interested in how color blending is done, I'll describe it shortly below.

Here, colir-blend is a very small function that I'll describe below, and color-values is a function from faces.el that forwards to a C function xw-color-values with this doc:

Which is a bit weird, since the last time I checked, the standard for colors was one-byte per channel, not two. Granted, it was about 10 years ago that I checked, and indeed, the entry on Wikipedia says:

Apparently, Emacs is outfitted to deal high-end digital image equipment. But I'm still pretty sure that most graphics cards that you can buy only give 8 bits per each channel. Anyway, here's the code for the basic functions:

In the example above:

I hope that you've enjoyed this little venture into Elisp and colors. People say rough things about Elisp sometimes, but hey: it offers functions ranging from the assembly-level ash, all the way up to Photoshop-grade color channel handling.

If only it could get a good optimization bump, like JavaScript got at one point, and a small threading library, we'd be all set.