I might have mentioned before that I'm using GNU/Linux on all of my computers. The particular flavor is Ubuntu, although it shouldn't matter much, since I can count the graphical applications that I use at all, besides Emacs, on one hand. They are: Firefox, Evince, Rhythmbox and VLC. Of course, as most true Emacs-ers, I strive to reduce this number to zero. So I got quite excited when I saw helm-rhythmbox show up in my package list. It works great: you can play and enqueue tracks with completion without leaving Emacs. Big thanks to @mrBliss, and, of course, the authors for dbus.el which makes interaction with D-Bus possible through Elisp.

I'm not as big a fan of Helm as I used to be, so I quickly implemented an Ivy equivalent:

Very simple, counsel-rhythmbox-dequeue-song is a clone of counsel-rhythmbox-enqueue-song with only the method change from AddToQueue to RemoveFromQueue (I blind-guessed the name, but there should be a reference somewhere). If you got tired of having a whole three actions to choose from, you can revert to the initial two with:

And here's how the updated C-o option panel now looks like: 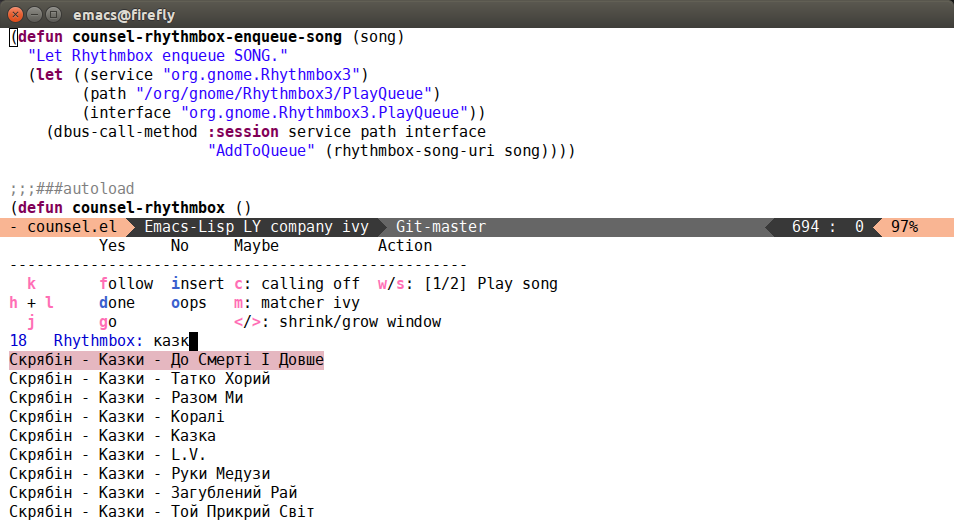 A bit of descriptions:

Similarly to hydra, each action has a short docstring, like "Play song" that should describe what it does. Here are a few usage scenarios:

Almost forgot, if this little intro got you excited, the packages that you should install from MELPA are: helm-rhythmbox and counsel.