Due to multiple requests, in an attempt to simplify things a new package ivy has been released on MELPA. The old package swiper, which used to provide most of the ivy features, now only provides swiper.el and depends on ivy. The third package counsel, which provides most of the goodies using ivy hasn't been changed and is still on MELPA. All three packages have the version 0.8.0 currently.

To reiterate the dependencies:

On GNU ELPA, a single package ivy-0.8.0 has replaced the previous stable version swiper-0.7.0. This package provides all the files combined of the three separate MELPA packages.

The release consists of 282 commits over 5 months by 15 authors. The detailed Changelog is available here, thanks to the ever useful Org mode export. The raw Org file is in doc/Changelog.org in the main repository.

The detailed documentation is available as an (ivy) Info node and also in HTML form here. If anyone wants to document something that's missing there, I'd appreciate the help: simply edit doc/ivy.org and send me a PR.

Below, I'll highlight some of the new features.

For example, to stack the top 10 elements of recentf on top of counsel-locate, use this code:

Here, (original-source) represents the async candidates of counsel-locate. All extra sources are static - each function is called once to generate a list of strings, which will be filtered later.

If you're not yet familiar with Ivy, you can get a quick reference card by pressing C-h m during any completion session. It will pop up an Org-mode buffer that describes most of the minibuffer key bindings.

Additionally, C-o (hydra-ivy/body), which serves a quick reference as well, received a small restructuring and a new binding. Press D to go to the definition of this hydra. This is useful to see what each key does, you might even want to customize some of it.

From now on, ivy-mode will also set completion-in-region-function. This means that functions like:

will use ivy for completion.

You can "permanently" save any completion session by pressing C-c C-o (ivy-occur). This will generate a new buffer in ivy-occur-mode with all your current candidates inserted there. Clicking or pressing f on any of the candidates in that buffer will result in the appropriate action being called with that candidate. 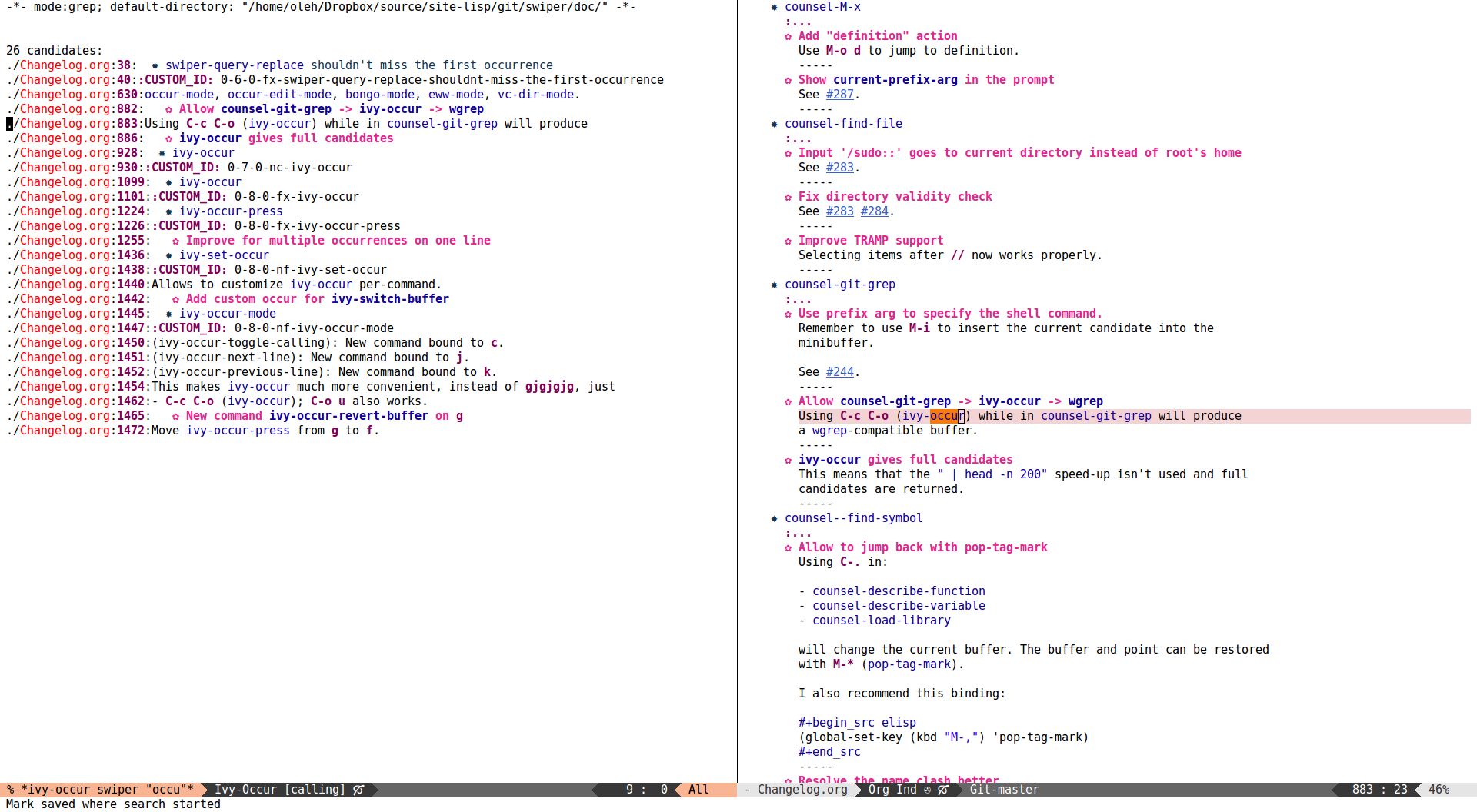 The *ivy-occur ...* buffers can actually be customized per collection type. Specifically for swiper, counsel-git-grep, counsel-grep and counsel-ag, the customizations are already in place that allow you to:

The second feature is often useful to me when I want to somehow change a symbol throughout the project. First I make a list of all occurrences via e.g. swiper and ivy-occur. After I went through some of the occurrences, I can press g to refresh the search for the same symbol and see how many I still have left.

Yet another cool feature is to press c (ivy-occur-toggle-calling) to toggle calling the action after each line movement and cycle through candidates by holding either j (ivy-occur-next-line) or k (ivy-occur-previous-line).

ivy-set-action can work on all commands

Here's the code I'm using currently in my config:

Here, "virtual" buffer means something that's close to a buffer but not an actual buffer. If you were using the setting ivy-use-virtual-buffers, you'd have your bookmarks and recentf items available to you as virtual buffers.

The new feature allows to select a whole window configuration with many buffers inside nested horizontal and vertical splits from ivy-switch-buffer.

To use it, set ivy-views, since it's nil by default. For instance, here's what I have in my config:

For a more elaborate and detailed use, see this post by Manuel Uberti.

From now on, if you want to enter a directory, simply select a candidate which is a directory and press /. You can still use the old binding C-j (ivy-alt-done), but / is shorter and easier to get used to if you're switching from Ido.

Note that this does not prevent the use of old functionality like:

A better way to search with counsel-grep-or-swiper

If you've ever been annoyed with the long start-up time of swiper in huge buffers, switch to this setting:

This command will use swiper for small buffers, and counsel-grep for large buffers.

Something very similar to this command was highlighted in this post by Karl Voit.

Just to give you an idea of how fast counsel-grep is:

If any of those sound interesting, go ahead and try them out.

Thanks to all the contributors. Happy hacking!