Orca is a new Emacs package, an attempt to refactor my old org-fu into something that's much more re-usable and easier to get started with.

When capturing from Firefox using org-protocol (together with this addon):

For example, I'm researching how to implement something with docker. This means that I have docker.org open, along with dozens of tabs in the browser.

I can configure to capture into the current org-mode buffer with a * Tasks heading like this:

Since docker.org has * Tasks, I just click the capture button in Firefox and follow up with an immediate C-c C-c in Emacs. The link is already in the right position, no need for an extra refile step.

You can set up the capture rules using M-x customize-group RET orca RET. 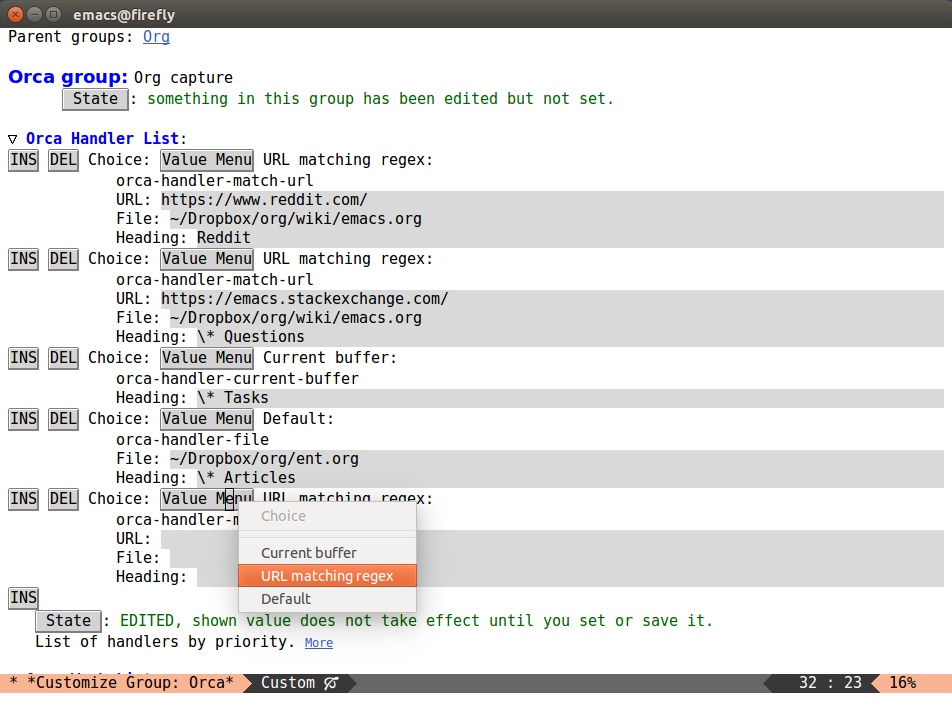 As you see, the customization is a list of an arbitrary length, with each element falling into one of three categories, each backed by an Elisp function (orca-handler-current-buffer, orca-handler-file, and orca-handler-match-url). Each function takes a different number of arguments (one, two, and three, respectively) - they are all annotated by the interface.

Here's the code that describes the expected :type to customize:

You can read more about the customization types in this manual section.

I hope you enjoy orca. I've submitted it to MELPA. Hopefully, it will be available for an easy install very soon.

Org-mode is a beautiful thing, but my previous attempts to configure it were huge config files of loosely related (i.e. the only thing in common was Org-mode) stuff spanning hundreds of lines. Orca is an improvement in this respect, since it focuses on a very narrow domain. It still tries to be flexible (just like org-capture) - you can plug in your own functions into orca-handler-list. But initially, the flexibility can be constrained into the customize-group interface, to allow for a self-documenting solution that's easy to get started with. Happy hacking!

PS. Thanks to all my patrons for advancing my Patreon campaign! As of this writing, we're almost at the 25% mark with 61 contributors.