I'd like to share a customization of company-mode that I've been using for a while. I refined it just recently, I'll explain below how.

Now, numbers are shown next to the candidates, although they don't do anything yet: 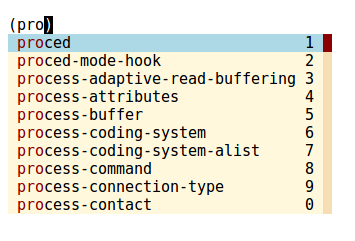 Besides binding 0..9 to complete their corresponding candidate, it also un-binds RET and binds SPC to close the company popup.

Initially, I would just bind company-complete-number. The problem with that was that if my candidate list was ("var0" "var1" "var2"), then entering 1 means:

My customization will now check company-candidates—the list of possible completions—for the above mentioned conflict. And if it's detected, the key pressed will be inserted instead of being used to select a candidate.

Looking at git-log, I've been using company-complete-number for at least 3 years now. It's quite useful, and now also more seamless, since I don't have to type e.g. C-q 2 any more. In any case, thanks to the author and the contributors of company-mode. Merry Christmas and happy hacking in the New Year!